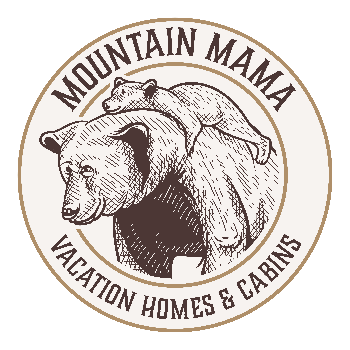 If you are planning a trip to West Virginia, the Harpers Ferry National Historical Park is a must-see. Few places mix fun, nature, and educational experiences in the same way as Harpers Ferry.

Staying within the national historical park will give you a unique chance to immerse yourself in the surrounding nature and air of bygone days. At our modern cabins, you’ll get to see a side of Harpers Ferry National Historical Park most only dream of: under the quiet blanket of stars. Guests boast about never sleeping quite so soundly when you remove noise and light pollution from the mix, and instead get a heaping dose of comfort.

Some people travel to the area specifically to see the natural sites or as an add-on to a longer trip to Washington, D.C., the Appalachian Trail, Virginia, and West Virginia. If you visit the Harpers Ferry National Historical park we encourage you to invest at least a few days when possible. With a park this large, it will be a challenge to walk each trail or explore each section within one day.

To better appreciate the appeal of this park, it helps to understand the park’s origins in United States history. 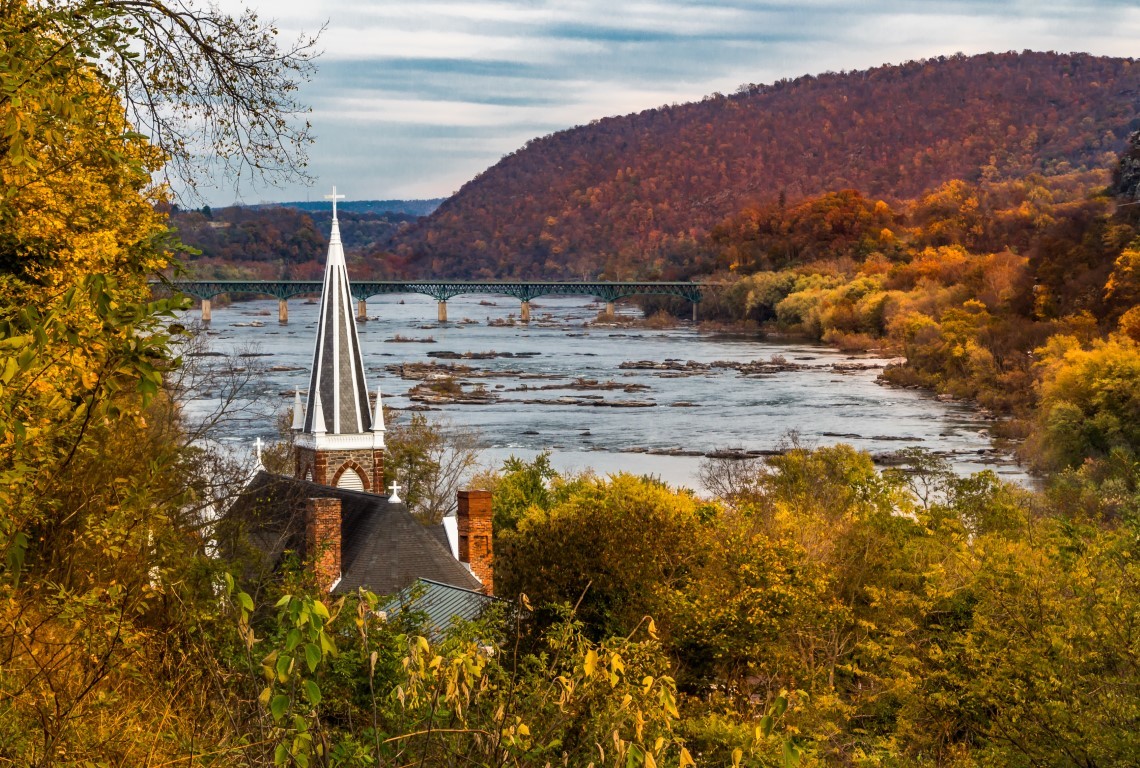 The Harpers Ferry National Historical Park was officially formed through an Act of Congress in 1963. Before that, it had been a national monument since the 1940s. A historical site typically commemorates just one specific part of history. On the other hand, the designation of a historical park honors multiple events, people, or places.

As its status as a historical park indicates, Harpers Ferry park is home to a rich and complicated history. This site is connected to many icons of American history. In fact, the history stretches back to the indigenous tribes that originally inhabited the area as early as 1200 B.C.

Since it is at the confluence of the Potomac River and Shenandoah Rivers, it served as a transportation hub, and thus played a crucial role in American industrialization, the abolition movement, and the Civil War.

Harpers Ferry may be most famous as the site of one major event that many believe helped to spark the American Civil War. Abolitionist John Brown staged a raid at the National Armory and Arsenal at Harpers Ferry. At the same time, he also unsuccessfully attempted to incite a slave rebellion. In fact, his goal was to arm enslaved people using weapons from the armory. After the raid failed, John Brown was tried for treason, convicted, and sentenced to death in nearby Charles Town, WV.

Harpers Ferry played an important role in the American Civil War. Less than a day after Virginia resigned from the union, union soldiers set fire to the Armory and Arsenal in 1861, destroying over 15,000 weapons. It went on to be the site of several significant civil war battles.

The Battle of Harpers Ferry happened in September 1862. During this battle, Robert E. Lee led the Army of Northern Virginia into Maryland. Meanwhile, he ordered another group of his army led by Thomas Jonathan ‘Stonewall’ Jackson to capture and hold the garrison at Harpers Ferry so they could secure a supply line. This battle led to the capture of 12,500 Union soldiers which was the largest number during the entire Civil War.

The area now included in the Harpers Ferry National Historical Park changed hands more than eight times during the course of the Civil War. The Union troops occupied Harpers Ferry in July of 1861 and held it until August. Both sides paid so much attention since the area held strategic importance, though neither side found it easy to defend their position.

Another historical figure with connections to Harpers Ferry is Frederick Douglass. He was born enslaved in Maryland and later emancipated himself and rose to fame as a best-selling author, activist, and orator. Douglas had met with Brown at least a couple of times prior to the Harpers Ferry raid. Years later, in 1881 Douglas visited Harpers Ferry to speak at Storer College.

Frederick Douglas once referred to Harpers Ferry as the place where the “end of American slavery began.” The founding of the historically black college Storer College was notable in American history post slavery. The college operated between 1867 and 1955. The college changed over the years but remains known as a landmark in the US Civil Rights Movement.

Before, during, and after the Civil War, Harper Ferry developed into an industrial area associated with innovation. One highlight was inventor John H. Hall pioneering adoption of machine manufacturing.

History enthusiasts visit Harpers Ferry National Historical Park to see and experience some of the sites like John Brown’s fort, civil war battlefields, one of the premier historic Black colleges, like Storer College, and more.

The natural beauty of the area also draws people who enjoy outdoor recreation like hiking, cycling, climbing, and fishing.

With such a large park, it helps to break it into areas.

If you need additional information about the park, visit the park’s Visitors Center. The park rangers may answer questions and provide tips. The center includes other amenities, including public restrooms, drinking water, a shuttle bus stop, maps, bicycle racks, and parking lots.

If you plan to picnic, be aware that it is next to the park’s designated picnic area. Picnicking isn’t allowed in any of the historic preservation zones. To make your picnic extra special, consider visiting the historic town of Harpers Ferry to stock your picnic meal.

You can get to Lower Town from the Visitor’s Center either by taking the shuttle bus or following the moderate 1.6-mile hiking trail. You may also park at the Harpers Ferry train station, though this parking lot fills up quickly on busy weekends.

In Lower Town, you may explore historic buildings such as a blacksmith’s shop, boarding house, John Brown’s fort, Provost Marshal’s Office, and the St. Peter’s Roman Catholic Church. Visit the Restoration Museum to learn about the techniques used to recreate the experience.

John Brown’s Fort was built in 1848 and, over the years, was used as a guardhouse by the Harpers Ferry Armory and a firehouse. Its current name comes from John Brown’s raid on the armory in 1859.

From Lower Town, you can join access many trails, including:

The Murphy Chambers Farm trail is an easy 1.3 mile trail leading to scenic views of the Blue Ridge Mountains and the Shenandoah River as well as Civil War cannons and fortifications that were made from dirt.

A site associated with the Battle of Harpers Ferry is found on the Murphy-Chambers Farm Trail. In 1848, Edmund H. Chambers purchased the farm, but the Union confiscated it in 1862. 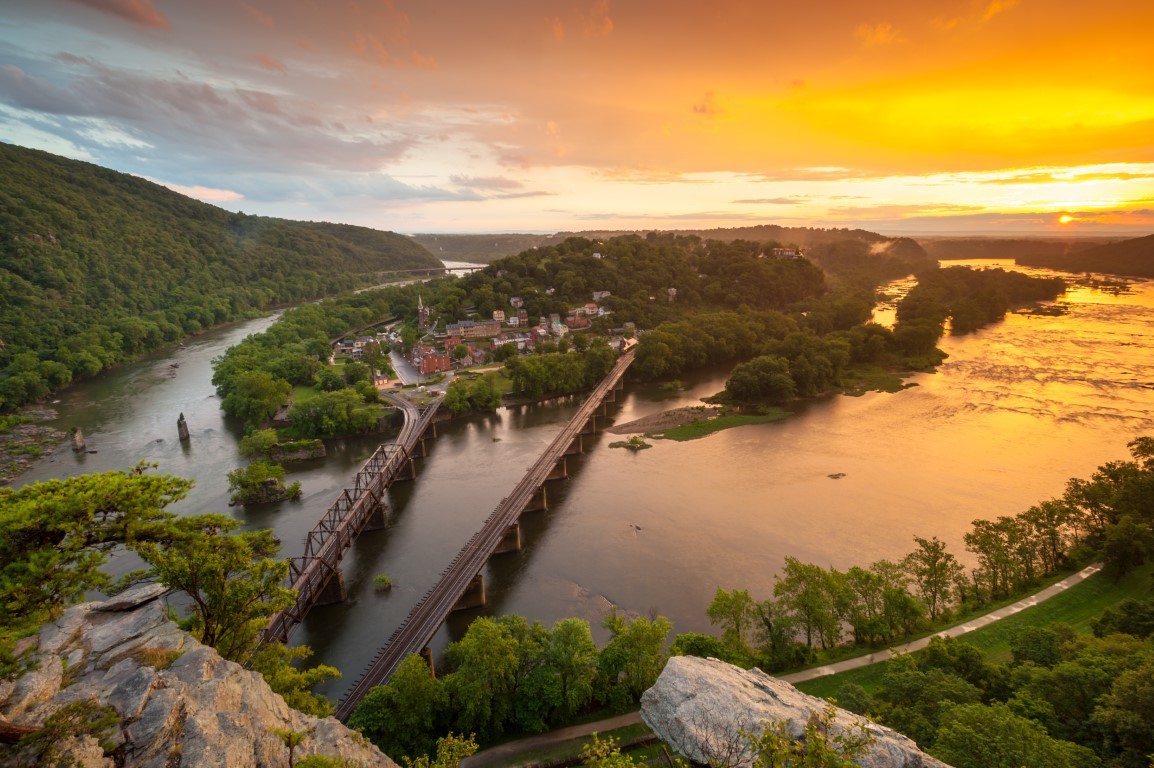 Maryland Heights is the most popular trail in the park, and for good reason. There are multiple variations of the hike making it either a moderate 4.5 mile hike or a more strenuous 6.5 mile hike. It’s well worth it for visitors who want to see as much of the Harpers Ferry National Historical Park as is possible from just one trail. See sites significant to Civil War and American industrial transportation history. The Naval Battery and a Civil War Stone Fort are among the highlights.

This 7.5-mile trail is both scenic and challenging. Enjoy views of the Potomac and Shenandoah rivers, phyllite and quartzite rock formations, and the surrounding Appalachian mountains.

As the name suggests, this 2-3 mile trail offers more views of the surrounding mountains. Other highlights include Jefferson Rock, Lockwood House, Harper Cemetery, and the Storer College Campus.

If you want to take a deep dive into history, then don’t miss the Appalachian Trail Conservancy Visitor Center. Also, take advantage of the chance to refill your water bottle, purchase drinks, or use the public restrooms.

The Camp Hill neighborhood also offers street parking along Washington Street, a common place to park if the train station lot is full and you prefer not to use the shuttle bus from the visitor center.

The trail is an easy 2 mile route that brings you through a beautiful river forest landscape, turbine, waterworks ruins, and the site of John Hall’s Rifle Works. As mentioned earlier, John Hall was an innovator who pioneered machine manufacturing. You can leave the crowds behind on this underrated trail.

The 184.5 mile long towpath runs along the C&O Canal between Georgetown, Washington D.C. and Cumberland, MD. Visitors enjoy biking, running or hiking along parts of the trail. The canal trail is particularly popular with cyclists not only because of its almost endless scenic views of the Potomac, but also because the stone dust path makes for such a nice cycling surface. Originally the canal was used to tow boats through the waterway.

These easy 0.3-2.4 miles of trails give you some of the most easily accessible views of the Blue Ridge Mountains and Shenandoah Valley. Those interested in Civil War history often find this a great place to survey the terrain and ponder which strategies may have been used. Other highlights include a view of the School House Ridge and Civil War-era cannons.

Other Things to Do While Visiting Harpers Ferry 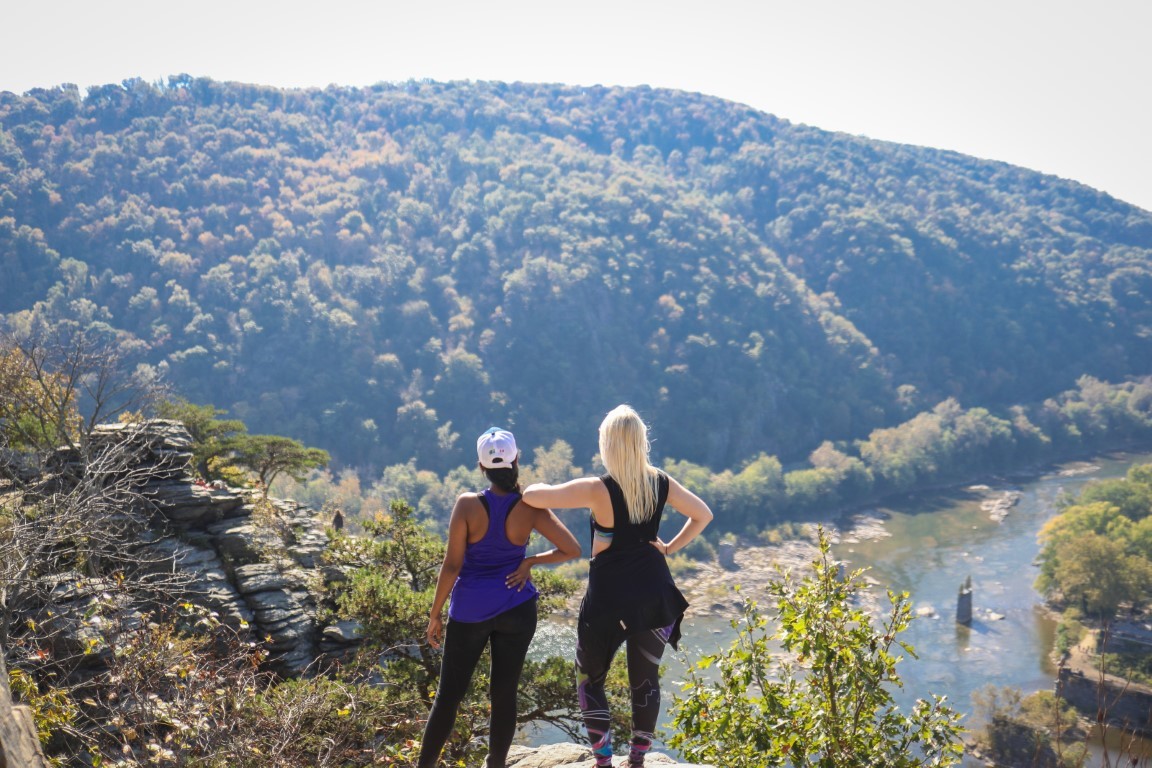 You can’t help but learn about history and explore historic places when visiting Harpers Ferry. It’s no wonder the park attracts visitors from all over the world who are interested in American history, African American history, the Civil War, transportation, and industry.

However, it would be selling Harpers Ferry short to think of it as merely a history lesson. The area is home to fantastic outdoor recreational activities where locals and visitors alike enjoy spending time enjoying nature.

If you enjoy outdoor recreation, you have ample opportunities at the Harpers Ferry

If you want to get a bite to eat, consider visiting one of the area’s restaurants just outside the park’s boundaries or pack a picnic. The designated picnic area is adjacent to the Visitor’s Center, which includes 14 picnic tables, including some in the shade. 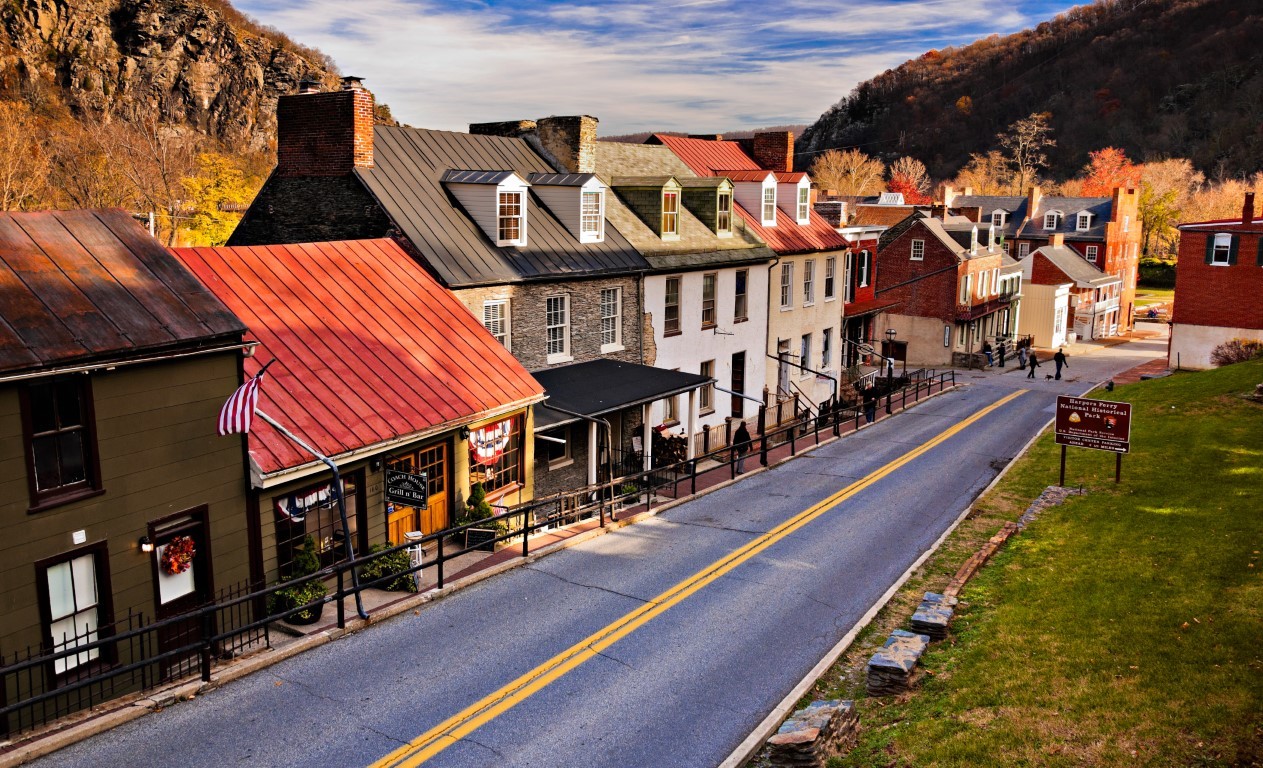 The town of Harpers Ferry, West Virginia is well worth a visit. Downtown is a picturesque town with many 19th century buildings earning its designation as a National Historic District by the National Register. Browse the unique boutiques, museums, and galleries. Grab a bite at one of the unique restaurants or attend one of the many cultural events. 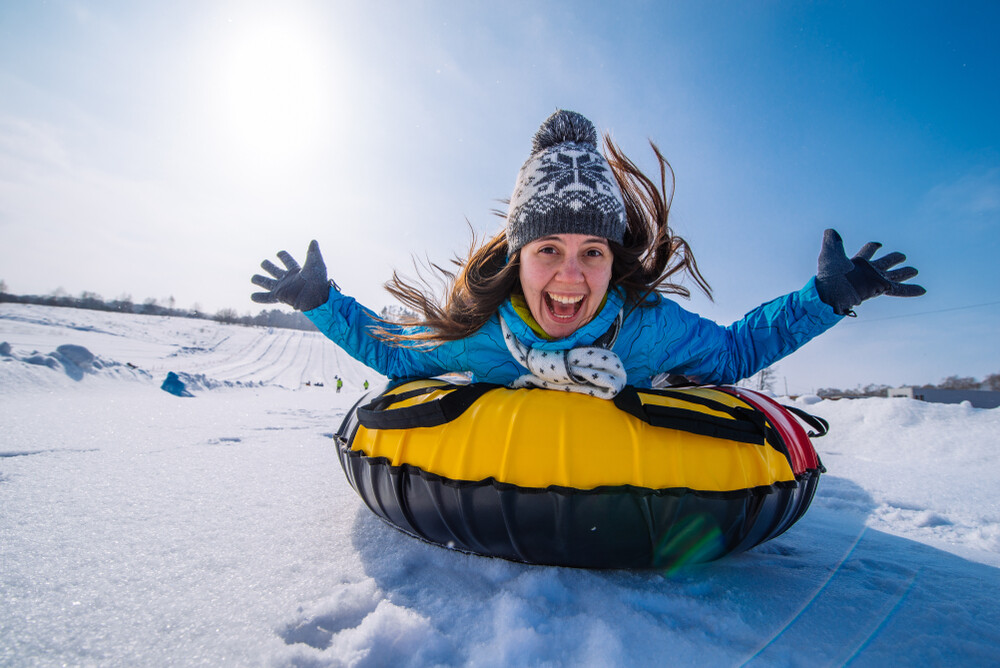 Harpers Ferry in the Winter: A Visitor’s Guide 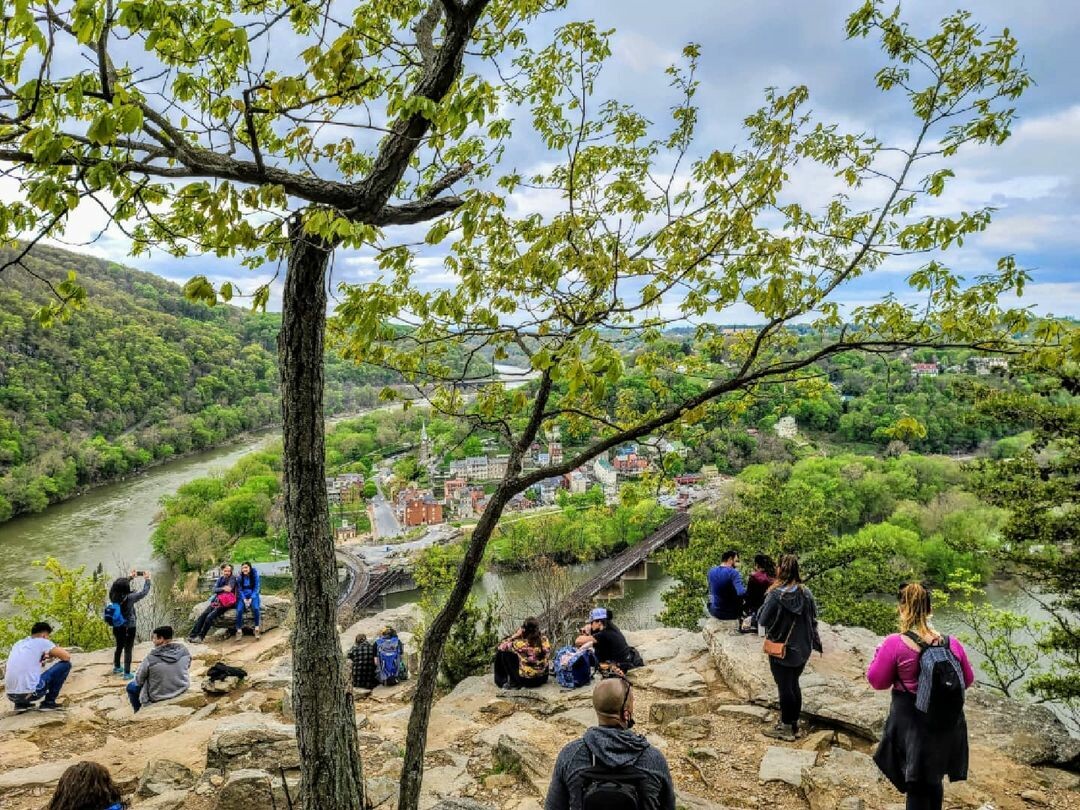 The Most Romantic Things to Do in Harpers Ferry 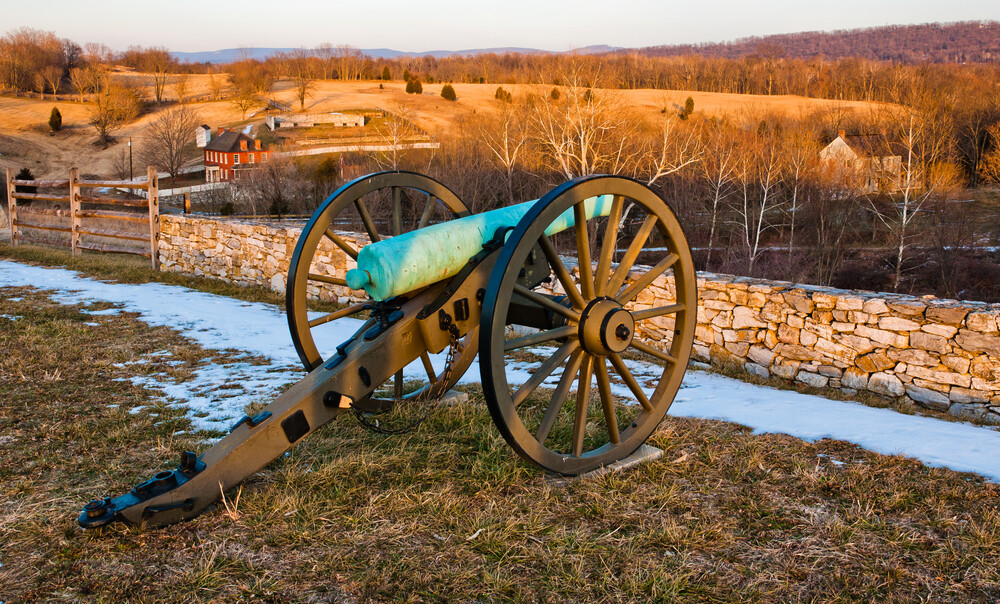 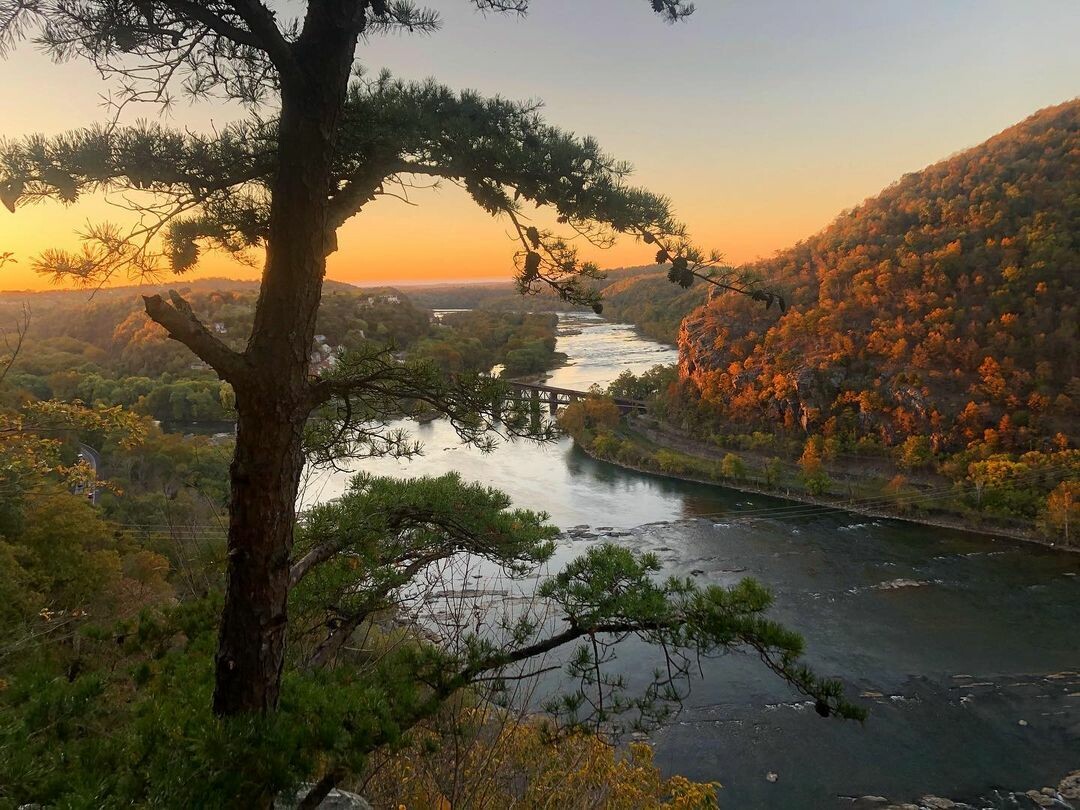 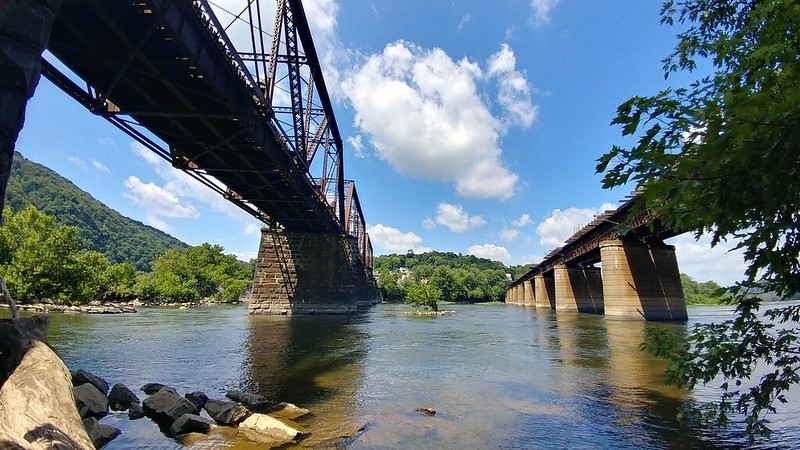 A Visitor’s Guide to Harpers Ferry in the Fall 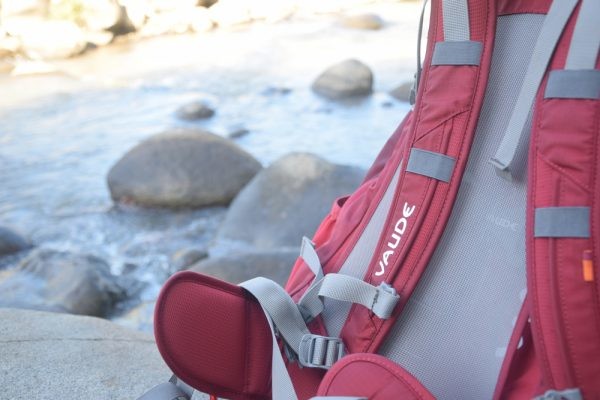 We have provided everything you need and what’s more,
book direct and you’ll enjoy the best rates for our rural holiday home. 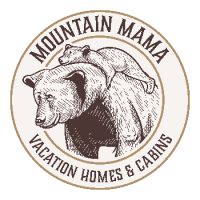 This website uses cookies to improve your experience while you navigate through the website. Out of these cookies, the cookies that are categorized as necessary are stored on your browser as they are essential for the working of basic functionalities of the website. We also use third-party cookies that help us analyze and understand how you use this website. These cookies will be stored in your browser only with your consent. You also have the option to opt-out of these cookies. But opting out of some of these cookies may have an effect on your browsing experience.
Necessary Always Enabled
Necessary cookies are absolutely essential for the website to function properly. This category only includes cookies that ensures basic functionalities and security features of the website. These cookies do not store any personal information.
Non-necessary
Any cookies that may not be particularly necessary for the website to function and is used specifically to collect user personal data via analytics, ads, other embedded contents are termed as non-necessary cookies. It is mandatory to procure user consent prior to running these cookies on your website.
SAVE & ACCEPT
[class^="wpforms-"]
[class^="wpforms-"]